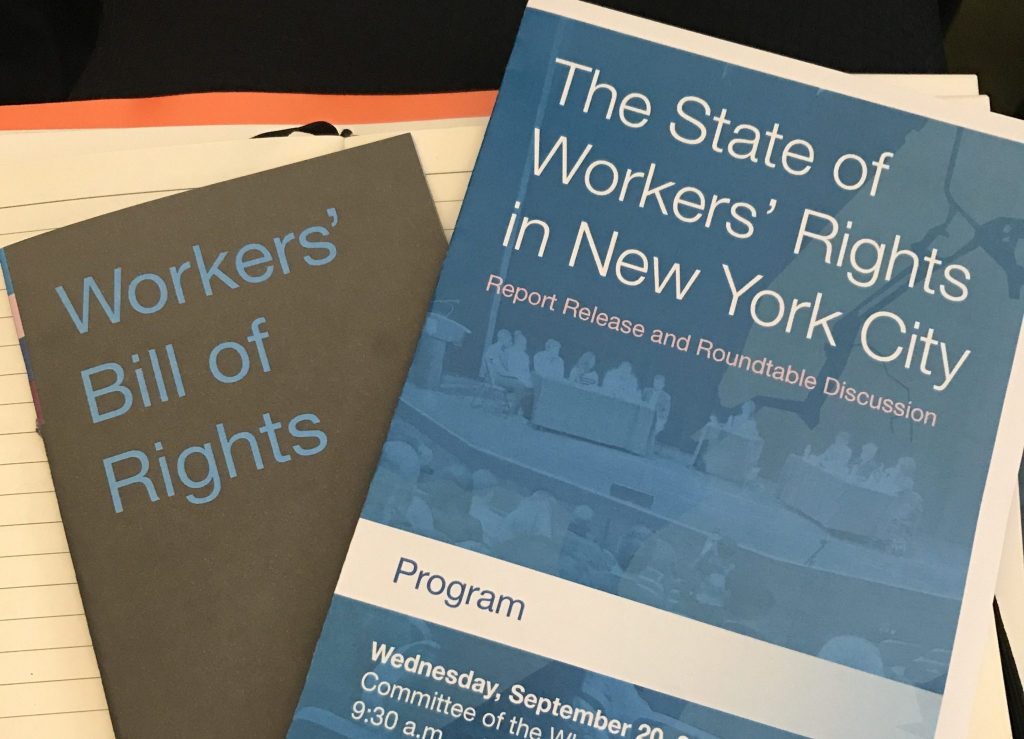 A Better Balance was pleased to join the New York City Department of Consumer Affairs’ Office of Labor Policy and Standards for the launch of their report, “The State of Workers’ Rights in New York City.” The report reflects the testimony and experiences of over 100 workers and advocates, including ABB Staff Attorney Molly Weston Williamson, given during a powerful public hearing in April convened by the Department of Consumer Affairs, in collaboration with the New York City Commission on Human Rights and the Mayor’s Office of Immigrant Affairs. The release of the report was accompanied by the release of new survey data reflecting the experiences of workers across the city.

This report calls attention to some of the most pressing problems facing workers across the city today, with particular focus on issues affecting more vulnerable workers, including immigrant workers, undocumented workers, home care workers, and domestic workers. Immigrant workers, who make up 45% of the workforce in New York City, testified about abusive employment practices and heightened anti-immigrant sentiment emboldened by federal immigration policy. ABB’s testimony emphasized the unique barriers many of these workers face in reporting employment violations, and encouraged the city to adopt new protections to ensure these workers can safely come forward.

In recent years, New York City has taken crucial steps forward in protecting workers, including the passage of landmark laws like the Earned Sick Time Act and the Pregnant Workers’ Fairness Act. However, there is still much work to be done.

For example, although the Earned Sick Time Act went into effect in 2014, too many vulnerable low-income workers reported that they still cannot use this important right. A shocking 48% of low-wage immigrant workers, 61% of low-income restaurant and retail workers, and 65% of low-income part-time workers report that they still do not have paid sick leave, even though the Earned Sick Time Act gives most private sector workers in New York City a legal right to paid sick time.

The report also discusses strategies for combatting abusive scheduling practices, which disproportionately impact contingent workers like retail and food service workers, independent contractors, taxi drivers, and day laborers. These workers testified about unpredictable schedules, abrupt shifts in income, and the difficulty of holding their employers accountable for unpaid wages and working conditions. Many of these needs were addressed by the passage of the city’s groundbreaking scheduling laws earlier this year, which we championed, and which will go into effect this fall.

We applaud the release of this important report, which draws attention to some of the most important issues facing New York City workers and lifts up the voices of workers themselves. Now, more than ever, we stand with workers fighting for their fundamental right to fairness in the workplace.