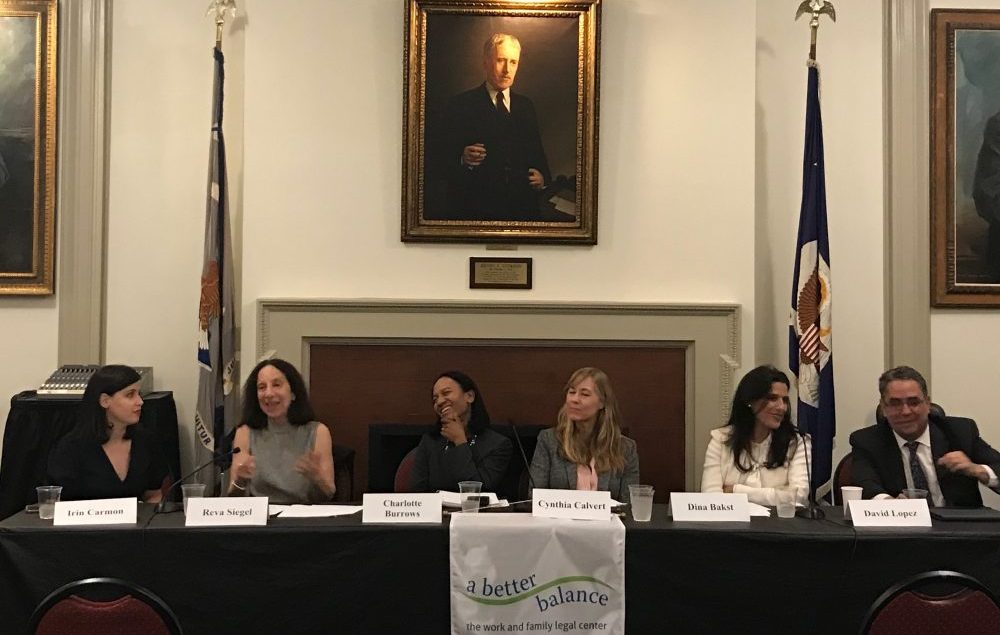 Today is the 40th Anniversary of the Pregnancy Discrimination Act (PDA) and A Better Balance, a leader in the fight to end pregnancy discrimination, has been marking the occasion in multiple ways, including by convening a panel earlier this week called “The Pregnancy Discrimination Act at 40 and the Continued Role of Lawyers” at the New York City Bar Association. The panel featured our co-founder and co-President Dina Bakst, along with Rutgers Law School Dean and former General Counsel David Lopez (bio) EEOC Commissioner Charlotte Burrows (bio), Yale Law School Professor Reva Siegel (bio) and Senior Advisor to the Worklife Law Center Cynthia Calvert (bio) and was moderated by Irin Carmon, a Senior Correspondent for New York Magazine (bio).

The goal of this event was to reflect on the history and impact of the PDA, as well to discuss strategies to continue to address the problem of pregnancy discrimination. Ms. Bakst emphasized in her opening remarks that this kind of discrimination is “shockingly alive and well” in our country today, as was starkly demonstrated in a New York Times article earlier this year featuring the stories of several women who have experienced pregnancy discrimination, including ABB client Candis Riggins. The problem spans industries and income levels and includes not only cases of open hostility toward workers being pregnant, but also, several panelists noted, a resurgence of paternalism, where pregnant workers are discriminated against by their employers and told that it is for their own good. These cases underscore the fact that, as Commissioner Burrows stated, “pregnancy discrimination is a cultural problem,” as well as a legal one.

Although the panel covered many of the shortcomings of the PDA and the persistence of pregnancy discrimination, the event also struck a positive note as panelists discussed possible new avenues for litigation under the Act, particularly in the wake of the Supreme Court’s 2015 decision in UPS v. Young, a case in which ABB filed an amicus brief. In describing the history of the PDA and how it has been applied by courts in the past, Professor Siegel emphasized that when it comes to addressing pregnancy discrimination “the tools are there, but judges have been skeptical about applying them.”

Beyond long-term litigation strategies, Ms Bakst spoke about the urgency of providing solutions to fill in the gaps left by the PDA to help workers like ABB’s clients, many of whom work in low-wage and physically demanding jobs and “can’t afford to wait weeks and months for justice” when the consequences of pregnancy discrimination are potentially devastating to their health and economic security. She described the important impact that state Pregnant Worker Fairness Acts have had in creating clearer and stronger protections against pregnancy discrimination, but also highlighted that “passing laws is only step one” and that outreach and education are essential to helping workers actually take advantage of their rights, often through self-advocacy.

Although the PDA has had a significant impact in the first 40 years of its existence and presents opportunities for important litigation to advance the rights of pregnant workers going forward, it is clear that there is much more work to be done to advance the Act’s stated goal of allowing women to “assume their rightful place and make a full contribution to our nation’s economy.” ABB looks forward to working with other advocates, including our fellow panelists, to make this goal a reality.

Join Us for Our Annual Celebration! [POSTPONED]

We invite you to join us on Monday, May 4th, 2020, from 6:30 to 9:00 pm at the beautiful Manhattan Penthouse to honor Jennifer Hyman, CEO, Rent the Runway, Chai Feldblum, partner at the law firm of Morgan, Lewis & Bockius, Juju Chang, Emmy Award-winning journalist, and Natasha Jackson, Community Advocate.

In the midst of COVID-19, pregnant workers and new moms, especially those on the front lines or returning to workplaces as states re-open — deserve more than our gratitude this Mother's Day. They deserve better laws and policies, and, importantly, they need to feel empowered to advocate for their needs and rights. That’s why, day in and day out, we are supporting countless pregnant women and new moms facing uncertainty and fear as the pandemic rages by listening, taking action, and empowering workers to know their rights.