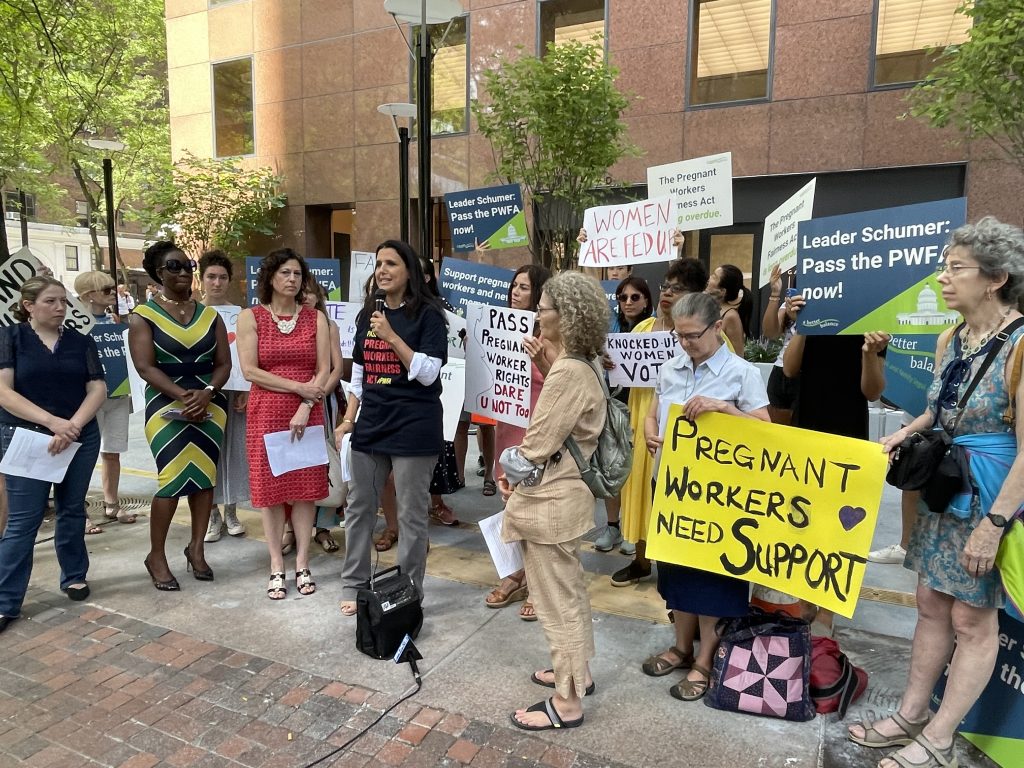 A Better Balance and New York City advocacy groups, maternal health and faith leaders, and moms rallied and held a press conference today outside of Senate Majority Leader Chuck Schumer’s NYC office urging him to bring the Pregnant Workers Fairness Act to a vote in the Senate before the August recess, and ensure expectant and new moms get much-needed support on the job.

New Yorkers were at Leader Schumer’s office to tell him it will be a travesty if the Senate does not ensure pregnant workers and new mothers get the protections they need to stay healthy and on the job, especially in light of attacks on women’s rights, a maternal mortality crisis, the nationwide baby formula shortage, the child care crisis, and more. A livestream of the event is available here.

“Millions of women across the country are counting on Senate Majority Leader Schumer to bring the Pregnant Workers Fairness Act to a vote, and today’s message from his constituents here in New York was loud and clear: we cannot afford to wait any longer,” said Dina Bakst, Co-President, A Better Balance. “With a national maternal mortality crisis, a formula shortage crisis and women’s rights on the chopping block, we must do all that we can to support expecting and new moms. That includes ensuring they aren’t denied accommodations and forced off the job at a time when they need their income the most. We are tired of being treated as second class citizens.  We are tired of being told to wait our turn, that we’re not a priority. We need a vote now.”

There is bipartisan support to pass the Pregnant Workers Fairness Act, a federal bill that would put a stop to pregnant and postpartum workers being denied reasonable, medically-necessary accommodations and forced off the job. Reasonable accommodations may include temporary light duty work, extra water or rest breaks, time off to recover from childbirth and breastfeeding support at work, absent undue hardship to the employer.

Recent polling from Data for Progress shows 89% of voters support the national implementation of the Pregnant Workers Fairness Act, a bill modeled after legislation passed in 30 states to protect pregnant workers.

The bill, which has passed in the House twice, has the support of Democrats and Republicans in the Senate. We urgently need Leader Schumer to hold a Senate vote and pass the bill into law for pregnant workers in states where there are no protections at all. Every day the Senate waits puts more women at risk.

“U.S. Senators have a clear and immediate moral obligation to pass needed laws that protect pregnant workers against injustice and discrimination to respond to women’s needs, especially in the wake of attacks on reproductive rights,” said Sonia Ossorio, President, National Organization for Women (NOW) – NYC. “The Pregnant Workers Fairness Act is a bipartisan bill that the Senate must pass as soon as possible. It will be so meaningful to millions of women and improve their lives. We won’t take kindly to politicians who ask us to wait. Those days are over.”

“The Pregnant Workers Fairness Act would make a huge difference for maternal and infant health, especially for women and birthing people of color. Black women are still more than 50 percent more likely to give birth preterm than White women. Many of the accommodations that pregnant workers request come from their health providers and are necessary to safeguard a healthy pregnancy,” said Kathryn Mitchell, Director, Maternal and Child Health Collective Impact, March of Dimes. “Studies show that accommodations as simple as extra bathroom breaks or a reprieve from standing all day can help prevent preterm birth. That is why the Senate needs to pass the bipartisan Pregnant Workers Fairness Act without any further delay as it would guarantee these accommodations.”

“Despite the Pregnancy Discrimination Act, too many Americans—especially those in male-dominated jobs, low-wage workers, and people of color—continue to be marginalized at work because they chose to become pregnant and sought an accommodation that would safeguard their pregnancy. New York stood up against this injustice by codifying the Pregnant Workers Fairness Act in our state law, but nationally, pregnant workers remain exposed and unprotected,” said Donna Lieberman, Executive Director, New York Civil Liberties Union. “The U.S. Senate must advance reproductive justice and economic security for millions of families by passing the bipartisan Pregnant Workers Fairness Act. As forced pregnancy rapidly becomes the law in half of this country, now is the time for Majority Leader Schumer to bring the PWFA to the floor for a vote.”

“ALL women & pregnant people deserve a pregnancy free of the threat of lost wages hanging over their heads because they have requested reasonable accommodations in their workplace,” said Odessa Fynn, Co-Chair, NYC Midwives. “The Pregnant Workers Fairness Act is a step in the right direction toward decreasing the legacy of maternal morbidity & mortality that negatively impacts  low-income pregnant people & Black, Brown and Indigenous women of color.”

“Our Jewish tradition affirms the inherent dignity of work and commands that we treat workers fairly. It is unjust and immoral for an employer to force a worker to choose between carrying a healthy pregnancy to term and earning a living to support the child once it’s born,” said Andrea Salwen Kopel, Executive Director, National Council of Jewish Women New York. “In this dismal moment for maternal health and reproductive rights, the Pregnant Workers Fairness Act is something meaningful that Congress can do for women right now.”

“In our country that prizes apple pie and motherhood, it is past time that Congress pass a law to guarantee that those who work during pregnancy and post-partum can stay healthy on the job. There are a host of physiological changes that take place during pregnancy and after childbirth that may require such simple accommodations on the job as more frequent bathroom breaks, altered lifting and balancing demands, providing equipment that fits and lactation support,” said Wendy Chavkin MD, MPH, Professor of Population and Family Health and Obstetrics-Gynecology, Columbia University Medical Center. “The Pregnant Workers Fairness Act provides an important legal protection so that the United States can make progress towards supporting the current and next generation.”

“As chair of obstetrics at two institutions I have been responsible for the care of over a hundred thousand, mostly minority, pregnant women. That experience has taught me just how vital it is to pass the Pregnant Workers Fairness Act. Women willingly and frequently sacrifice their own wellbeing for that of their family and their pregnancy. Accordingly, when they have to choose between their job and their physician’s advice they are trapped between Scylla and Charybdis; they can’t afford to lose their jobs because of the harm it would cause their families, but they put their pregnancy at risk if they don’t follow their provider’s advice to, for example, rest when they are diagnosed with an impending obstetrical crisis (e.g., pre-eclampsia), or come for extra prenatal visits when their diabetes is out of control,” said Howard L. Minkoff, MD, FACOG, Distinguished Service Professor SUNY Downstate, Chair Emeritus Department of Obstetrics and Gynecology Maimonides Medical Center, Regional Chair Emeritus SUNY Downstate. “They are often left with only the slim hope that staying on the job, and taking their chances with their medical condition will all work out. In fact, as I have witnessed, far too often it does not. PWFA will help extricate pregnant women from this bind, and thereby gift the next generation with the health it deserves.”

ABOUT A BETTER BALANCE: A Better Balance is a national nonprofit legal advocacy organization dedicated to advancing justice for workers, so they can care for themselves and their loved ones without jeopardizing their economic security. Its expert legal team combats discrimination against pregnant workers and caregivers, and advances supportive policies for families like paid sick time, paid family and medical leave, fair scheduling, and accessible, quality childcare and eldercare. Learn more at abetterbalance.org.