Workers can now use their sick time to care for a more diverse range of family members, as well as to address needs arising out of domestic or sexual violence. All workers deserve the right to care for themselves and their families, no matter what their families look like. We’ll keep fighting here in New York and across the country to ensure that right is a reality for all our families.
Share on facebook
Share on twitter
Share on linkedin
Share on email
Blog Categories: Paid Sick Time, Recognizing All Families 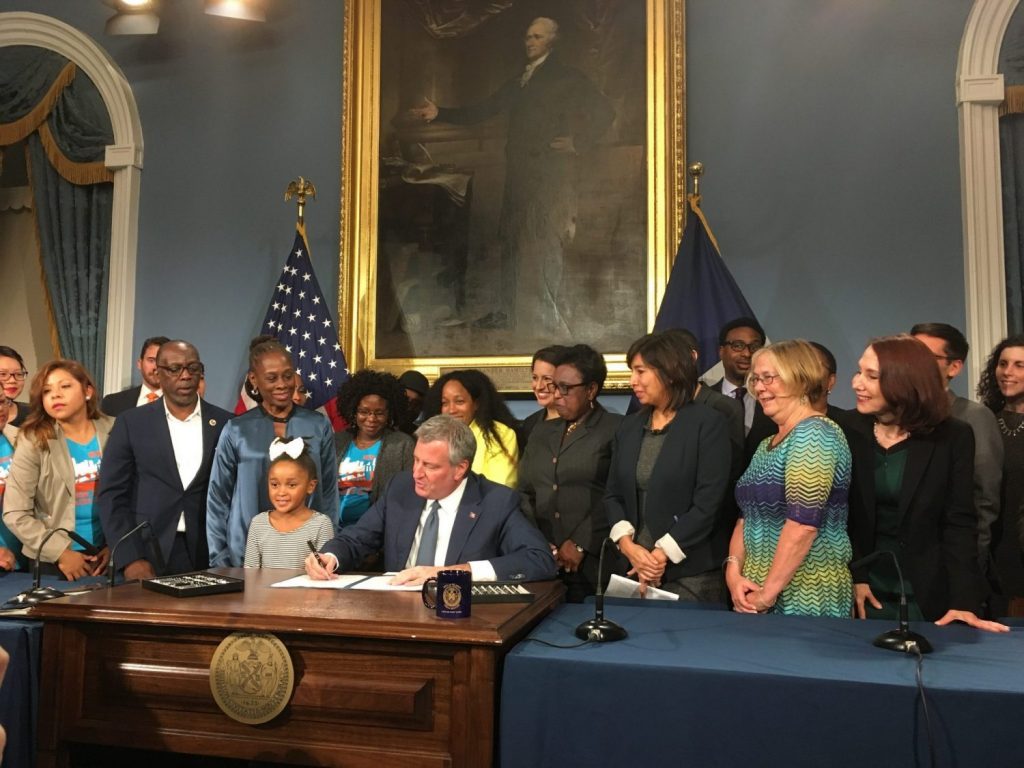 On May 5, millions of New York City workers gain new rights through the expansion of New York City’s earned sick time law. Workers can now use their sick time to care for a more diverse range of family members, as well as to address needs arising out of domestic or sexual violence.

A Better Balance led the way in the fight for the original Earned Sick Time Act, which was passed in 2013. At the time of its passage, the New York City law covered by far the most workers of any sick time law in the country and its enactment marked a critical turning point for the movement. Over forty jurisdictions (including ten states) across the country have passed their own sick time laws, the overwhelming majority of which were passed since New York City’s law. Since 2013, we’ve been working with cities and states to pass these new laws, while also playing a crucial role in enforcing New York’s law.

The expansion improves upon the city’s already strong protections in two important ways. First, the definition of “family member” now ensures that workers can care for all the people who are most important to them when they are sick or suffering, including workers’ extended families and chosen families, loved ones to whom they may not have a legal or biological relationship. Chosen families are especially important to LGBTQ New Yorkers, including older LGBTQ adults who rely on their chosen families for needed care. Veterans are also especially likely to rely on friends and other chosen family members for care. In enshrining workers’ right to sick time that can be used to care for chosen and extended family, New York City is joined by New Jersey, where Governor Murphy signed an inclusive paid sick days law just this week, along with Los Angeles; Chicago and Cook County, Illinois; St. Paul, Minnesota; Austin, Texas; and the states of Arizona and Rhode Island.

New York City also joins jurisdictions across the country, including all ten states with paid sick time laws, in providing special protections to workers dealing with the effects of domestic violence, sexual abuse, and stalking, which are commonly known as safe time. Under the existing New York City law, victims of domestic violence, sexual abuse, and stalking already had the right to use their earned sick time to address their physical and mental health needs, along with those of their families, as a result of these heinous crimes. Workers can now use this earned time as “safe time,” which covers non-medical needs related to domestic violence, sexual abuse, and/or stalking. These could include meeting with an attorney or social services agency, relocating or planning to relocate for safety reasons, interacting with law enforcement or the district attorney’s office, enrolling a child in a new school, or other actions to ensure a worker’s health and safety and that of the worker’s family. New York City is also the first place in the country to specifically extend safe time protections to victims of human trafficking and their families.

We were proud to support these crucial new protections from the very beginning, including testifying in support. All workers deserve the right to care for themselves and their families in the face of illness or violence, no matter what their families look like. We’ll keep fighting here in New York and across the country to ensure that right is a reality for all our families.