Low-wage women in particular need supportive laws and policies to help them stay on the job, free of harassment and abuse, earning the fair and equal wages they deserve. That’s why it’s crucial that, at a time when the Trump Administration is rolling back progress for women, New York is moving forward by enacting bold reforms that promote equality and help level the playing field.
Share on facebook
Share on twitter
Share on linkedin
Share on email
Blog Categories: Fair & Equal Pay, Paid Family Leave, State Laws 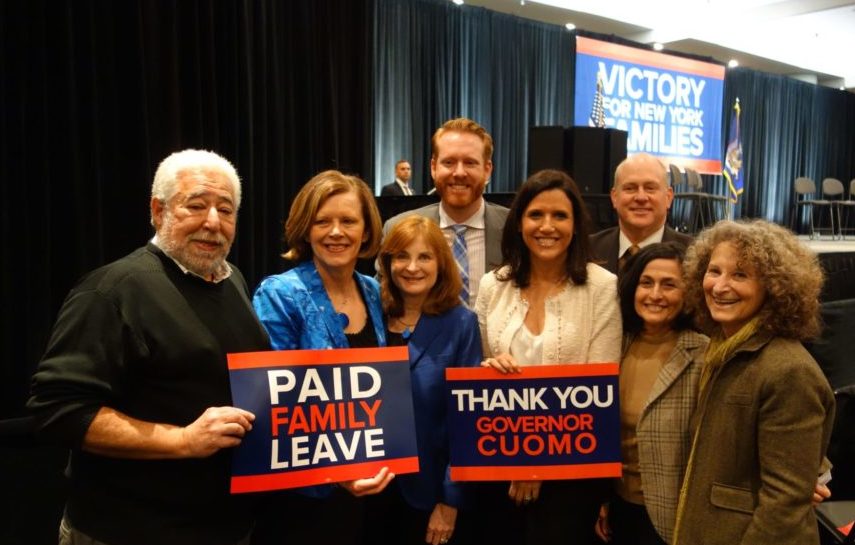 In this #MeToo moment, America’s women need more than a hashtag: they need concrete solutions that help keep them on the job and on the path to promotion, to help break down toxic male cultures and change the balance of power. Low-wage women in particular need supportive laws and policies to help them stay on the job, free of harassment and abuse, earning the fair and equal wages they deserve. That’s why it’s crucial that, at a time when the Trump Administration is rolling back progress for women, New York is moving forward by enacting bold reforms that promote equality and help level the playing field for women.

On January 1, New York’s groundbreaking paid family leave law will go into effect, providing essential economic security to more than six million workers across the state. The law will guarantee workers paid time, job-protected time off to bond with a new child for both moms and dads, including same-sex and adoptive parents, care for a seriously ill or injured family member, or address needs due to a family member’s military deployment. New Yorkers will no longer have to choose between caring for their families and their paycheck.

Because women continue to be the primary caregivers in most U.S. families today, New York’s paid family leave law will have a profound impact on women’s ability to stay attached to the workplace. New mothers with access to paid leave are more likely to return to work, make more money, and stay off of public assistance than those without paid leave, which directly benefits women, families and our economy.

Paid family leave is just one example of how state and local leaders can make real progress for gender equality even in the face of Washington’s hostility. This summer, without explanation, the Trump Administration froze an Obama-era rule (EEO-1) that would’ve required companies to file data broken down by race, ethnicity and gender on workers’ wages to address unequal pay. In contrast, here in New York, Governor Andrew Cuomo issued a pair of executive orders earlier this year extending new pay equity protections to employees of the state and its contractors. One bars state agencies from asking applicants for salary history information while the other imposes new pay data disclosure requirements to help the state better detect discriminatory pay practices.

These executive orders build on a series of women’s equality measures spearheaded by Governor Cuomo that help to break down barriers that perpetuate discrimination and inequality based on gender and race.  For example, one measure strengthens sexual harassment protections for women in small workplaces.  Another law closes a significant loophole in New York State’s equal pay law and prohibits employers from penalizing employees who discuss their wages with each other. And a third measure requires employers to provide reasonable accommodations to pregnant employees, particularly women in low-wage and physically demanding jobs, so they can continue working without risking their health.  Unsurprisingly, similar legislation remains stalled in Congress.

Of course, our work to advance women’s equality and economic security in New York is far from over. For example, eliminating the subminimum wage for tipped workers, who are disproportionately women, would help prevent sexual harassment in New York’s restaurant industry while increasing women’s economic security. Improving access to quality, affordable child care would make an enormous difference in women’s ability to work and care for their families.

Yet in these times of uncertainty and confusion, New York remains a beacon of hope for people committed to equality and fairness.  As we head into 2018, it is not enough to resist attacks on women’s health, safety and economic security—we must take action to make our society more equitable for all women and families.