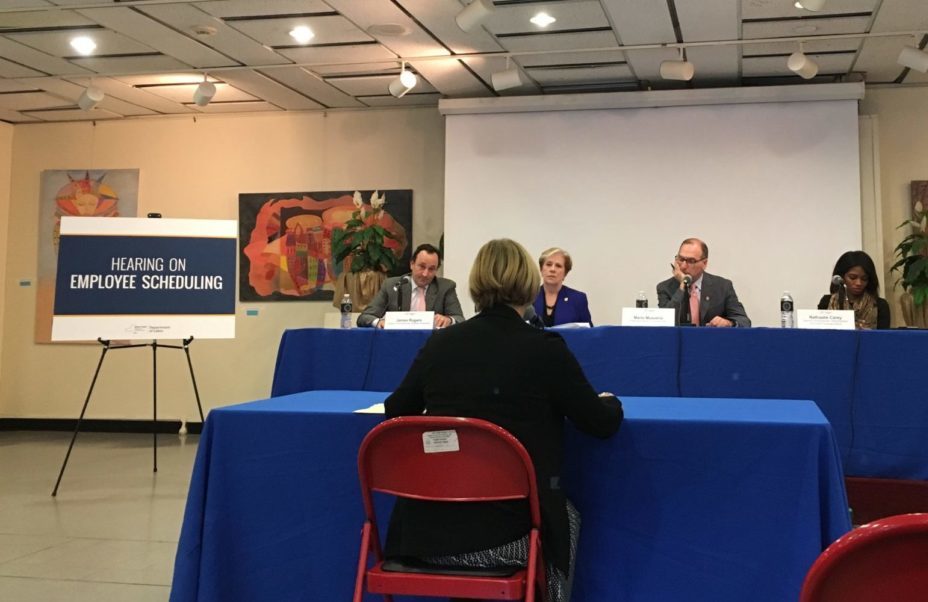 Yesterday, the New York State Department of Labor (DOL) held the final of four public hearings on employee scheduling concerns in New York State. The DOL will use the comments provided at these hearings to figure out how best to address “just-in-time,” “call-in,” and “on-call” scheduling—abusive practices whereby employers require workers to be available to either call in or be called for a shift with no guarantee that they will actually be given work. This practice deprives hourly workers of both a steady income and control over their own day-to-day lives.

Yesterday’s hearing, held in Manhattan, focused on scheduling practices for retail workers, supermarket workers, and others covered by the Minimum Wage Order for Miscellaneous Industries and Occupations. Several workers’ advocates including ABB Co-Founder & Co-President Sherry Leiwant attended the hearing and delivered testimony calling on the DOL to end abusive scheduling practices within these industries.

As the advocates explained, when workers are forced to remain on-call even though they may not be required to work, or when they can be told their shift is cancelled hours before their reporting time, it makes scheduling their own lives impossible. Arranging childcare and transportation is a daily struggle. Taking on a second job or attending classes isn’t an option, a particular problem for part-time workers who might need additional employment to supplement their income or who may be working part-time because they are also in school. And without steady earnings, effective budgeting is impossible.

ABB’s testimony focused on the impact that abusive scheduling practices have on caregivers and emphasized that because the majority of caregivers are women, fair scheduling is a women’s rights issue. Women retail workers in particular face enormous challenges around caring for their families while also providing for them. Leiwant called on the DOL to expand existing labor regulations that currently require employers to pay workers when they report to a shift even if they end up sending them home. By expanding these regulations to also require payment to workers for time they are forced to remain on-call, the State could reduce the economic hardship to workers subject to on-call scheduling. At the same time, because employers often keep large pools of on-call workers to insure someone will be available if needed, requiring pay for those on-call would help end the practice by creating an economic disincentive for employers to utilize it unless absolutely necessary.

In May, New York City enacted a package of Fair Work Week bills to tackle abusive scheduling practices in two low-paying industries in the city—fast food and retail. That package of laws which require two weeks advance notice of schedules, a minimum time between last shift and first shift (“clopening”) and rules around access to additional hours for fast food workers as well as a ban on on-call practices within 72 hours of a shift, will go into effect in November. Statewide requirements around scheduling abuses would protect workers outside of New York City and we are hopeful that such protections will be adopted soon. At the same time, to the extent the city laws offer greater protection, it is important that those laws be permitted to remain in place so that workers will have the maximum protection possible with respect to their work schedules.

Medicaid recipients who can and do work are at risk of losing health care coverage, since low-wage workers are more likely to be underemployed and to face unpredictable work schedules over which they often have no control. This is just one of the challenges that many of ABB’s clients and others already face in balancing work and their responsibilities in caring for children and other family members.

On March 31, 2010, President Obama and First Lady Michelle Obama hosted a forum on…