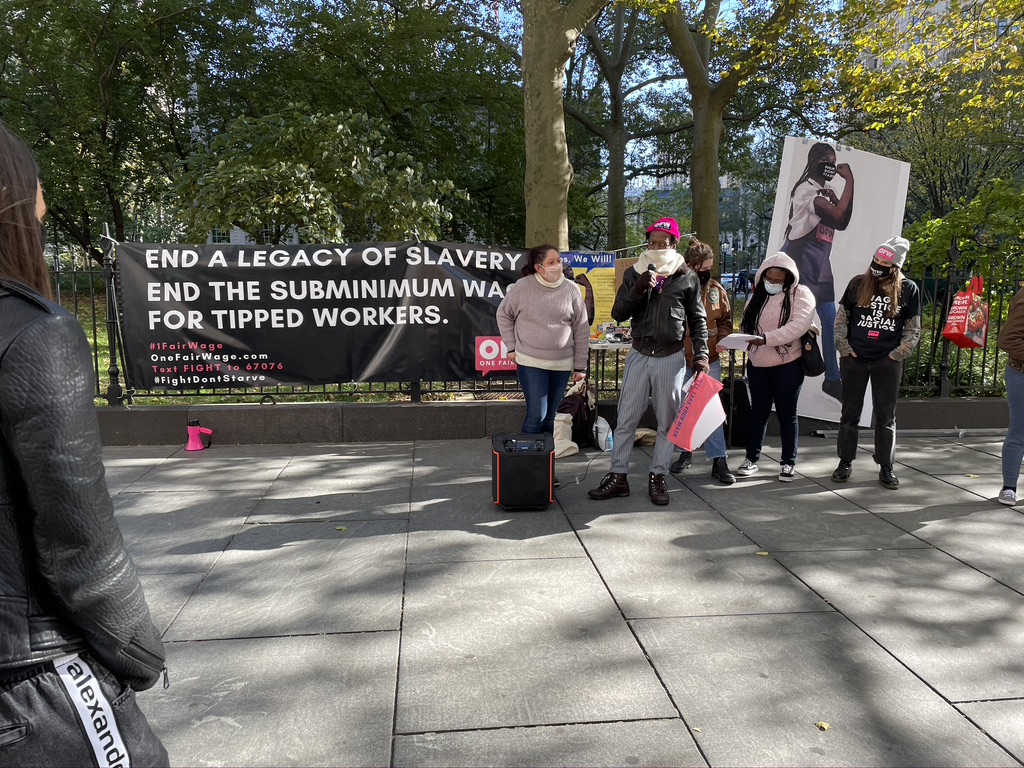 In a rare piece of non-election news, ABB was thrilled to participate earlier this week in a rally put on by the Restaurant Opportunities Center (ROC) in support of a proposal to move New York City close to ending the outdated and inequitable tipped minimum wage in favor of One Fair Wage that applies to all workers, including tipped employees.

This year’s COVID pandemic has, among other things, highlighted the precarity of working in the restaurant industry. Even before COVID, restaurant workers faced staggering rates of sexual harassment while only being guaranteed a $10 minimum wage, in contrast to the city’s general $15 per hour minimum wage rate.

Now, during COVID, restaurant employees are being asked to be front-line workers as they continue to serve customers during a worldwide pandemic, for that same $10 per hour wage. This is despite the fact that restaurant workers now have more work to do—enforcing mask mandates, hewing to stricter cleaning standards, and complying with other safety requirements—and fewer customers due to indoor dining limitations.

Recognizing the dire straits that the restaurant industry is in, the New York City Council recently adopted an ordinance allowing restaurants to impose a 10% “COVID surcharge” on bills to recoup some of the money they have lost during the pandemic. But there is no requirement that the proceeds from this surcharge go to restaurant workers themselves, and in fact, restaurant workers who must rely on tips due to their sub-minimum wage have reported that those tips have decreased once the surcharge is instituted.

We strongly support ROC and other organizing partners who instead urge the city council to only allow restaurants to impose a surcharge if they commit to paying their workers the full $15 minimum wage. To that end, we participated in a rally on Monday calling attention to the situation restaurant workers have found themselves in and the need for local action on this issue. We are grateful for the work that ROC and council member Reynoso have done to move New York City closer to enacting One Fair Wage and look forward to continue working with them and other partners to make sure that the ordinance is passed soon.

Staying Home from Work When You, A Child, or A Family Member Are Sick: Know Your Rights