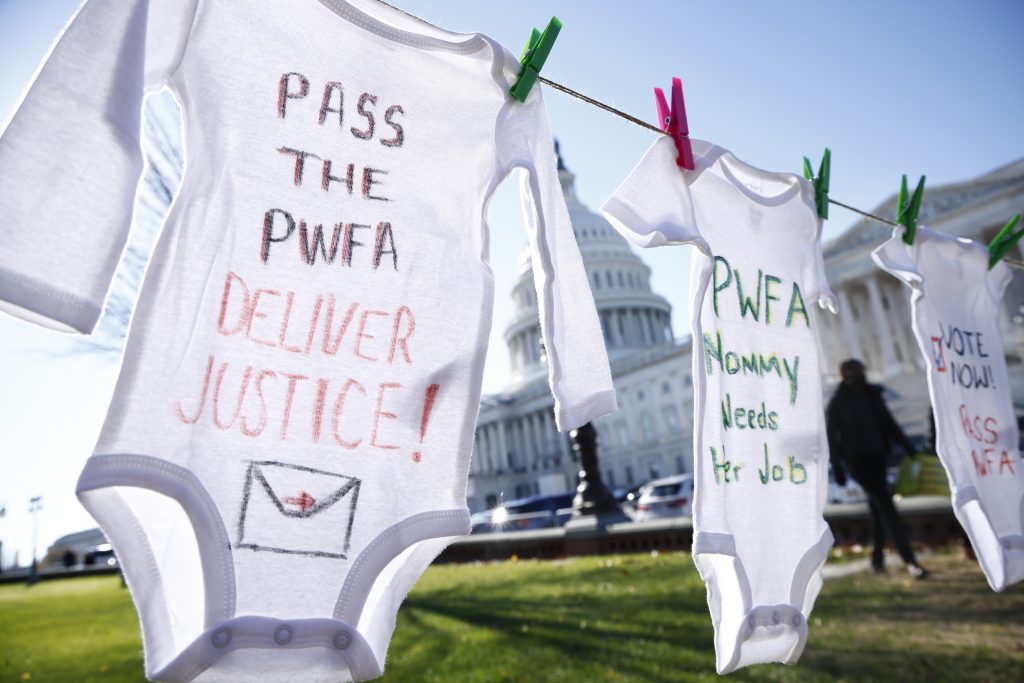 (Washington, DC) A Better Balance applauds the House of Representatives’ passage of the omnibus spending package, which includes the Pregnant Workers Fairness Act and PUMP for Nursing Mothers Act as amended in the Senate. These critical protections are well on their way to becoming law, just awaiting signature by President Biden.

In response to this news, Dina Bakst, Co-Founder & Co-President of A Better Balance, released the following statement:

“This victory is a long time coming—A Better Balance and our allies have been pushing to pass the Pregnant Workers Fairness Act for over ten years and tirelessly for the PUMP for Nursing Mothers Act this Congress. But above all, this victory belongs to the women who have fought alongside us for so many years, bravely sharing their stories and speaking out against pregnancy discrimination. These victories represent some of the most significant updates to our federal workplace protection laws in decades.

When the President signs the omnibus, millions of pregnant and postpartum workers will secure new rights that will grant them the long overdue respect, dignity, and equality they deserve.

See below for A Better Balance’s statement on the December 22nd, 2022 Senate passage of the omnibus package:

(Washington, DC) – A Better Balance today celebrates the Senate passage of the Pregnant Workers Fairness Act (Sen. Cassidy/Sen. Casey) and the PUMP for Nursing Mothers Act as amendments to the omnibus spending package. A Better Balance has led the fight to pass the PWFA for over 10 years, and been a leader on the PUMP Act, joining with allies and brave women across the country to demand fair treatment for pregnant workers and those who have recently given birth.

A Better Balance Co-Founder and Co-President Dina Bakst, whose Op-Ed inspired the introduction of the PWFA over a decade ago, released the following statement in reaction:

“The omnibus spending package includes a huge step forward for moms and working families nationwide. With the Pregnant Workers Fairness Act poised to become law, we have achieved a major milestone for gender, racial and economic justice across the country. This monumental civil rights legislation, one of the most significant in decades, will promote fairness, equality, and opportunity for millions of expecting and new moms, especially women in low-wage and frontline jobs, who are the backbone of our economy.

“With PWFA, pregnant workers will no longer have to make the impossible choice between the health of her pregnancy and affording food for her family. A new mom won’t face job loss when she’s still recovering from childbirth. Employers can no longer treat pregnant workers like they are expendable once they find out they are expecting a child or need a modest accommodation to prevent serious health complications.

“What’s more, the inclusion of the PUMP for Nursing Mothers Act—legislation that will guarantee millions more workers the right to break time and space to express milk—makes the omnibus an historic package of vital protections and support for moms, moms-to-be and working families. After decades of being brushed aside and being treated like second-class citizens, pregnant and postpartum workers will finally have the law on their side, affording them long overdue respect, dignity and equality under our nation’s civil rights law.

“We thank our Senate champions of the PWFA, Senators Bob Casey and Bill Cassidy and of the PUMP Act Senators Jeff Merkley and Lisa Murkowski, as well as Senators Patty Murray and Senator Richard Burr for prioritizing the needs of expecting and new moms. We also thank Senate Majority Leader Schumer for passing this critical legislation. And we thank our House champions as well, lead champions for the PWFA Rep. Jerrold Nadler and Rep. John Katko, and lead champions for the PUMP Act, Rep. Carolyn Maloney and Rep. Jamie Herrera Beutler, and Speaker Pelosi.”