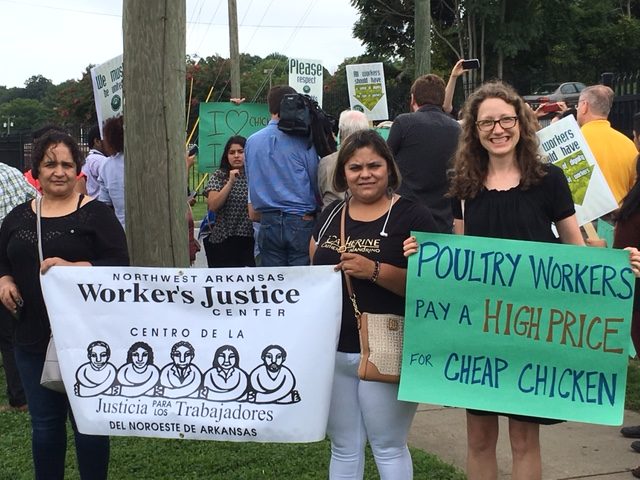 Earlier this year, the National Chicken Council submitted a petition to the federal government to allow poultry processing plants to be exempt from line speed requirements put in place for worker and consumer health and safety. The Poultry Workers’ Rights Coalition has been documenting how these unsafe line speeds (currently up to 140 birds per minute) jeopardize already low-paid and vulnerable workers for years. That’s why A Better Balance submitted comments last week to the Food Safety Inspection Service urging them to reject the petition.

As we said in our comments:

“Workers in the poultry industry already work with break neck line speeds, and increasing the speed will increase worker injuries and illnesses

ABB is particularly concerned about the result any line speed increase could have on pregnant workers, many of whom are already risking their health on the job for fear of requesting reasonable accommodations. In a report called ‘Women On the Line’ by Oxfam America, that ABB advised on, one of the recommendations to ensure a healthy and safe workplace for women was: ‘Ensure that the work speed is at a pace that does not inflict damage on workers.’[1] Poultry workers with disabilities who are able to work, but may require a reasonable accommodation in order to not damage their health, may also be at risk from increased line speeds.”

“My experience was the lines are going pretty fast, and people struggle to work as fast as they ask us to work. ”

In submitting these comments, we joined our many partners in the Poultry Workers’ Rights Coalition, like the National Employment Law Project, Oxfam America, and UFCW in calling for the rejection of the NCC’s petition.

2017 has been busy for poultry workers’ rights activists. Earlier this year ABB joined an unprecedented coalition of workers’ rights, food safety, and animal welfare advocacy groups in meeting with top USDA Food Safety Inspection Service officials to oppose this petition to increase line speeds. We also previously submitted comments to the federal government about the harmful use of peracetic acid in plants, particularly with regards to reproductive health. Over the summer we participated in a poultry workers’ rights convening in North Carolina, hearing stories from current and former workers and participating in a direct action demanding bathroom breaks for workers in a nearby plant.

We will not stop fighting until all poultry workers are treated with the dignity and respect that they deserve.

The deliberately misnamed “Working Families Flexibility Act” (H.R. 1180) is a wolf in sheep’s clothing, purporting to offer flexibility to workers when, in reality, it will deprive workers of overtime pay. Join us in making sure the federal government doesn’t steal overtime pay from working people!