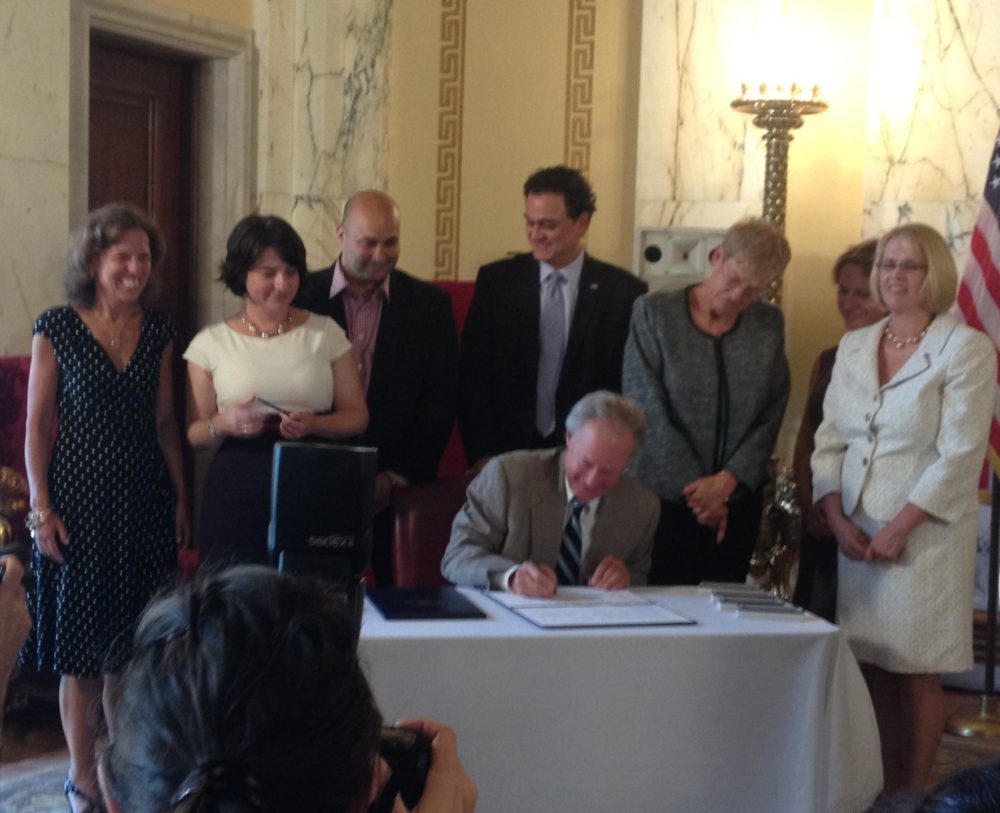 Yesterday was a terrific day for working families in Rhode Island — and a day that gives hope to families around the country.

Governor Lincoln Chafee signed into law a bill (H.B. 5889/S.B. 231) that will insure that working families will have income support when they have a new child or need to care for a seriously ill family member, making Rhode Island the third state to create such a program.  Like the other two states, California and New Jersey, Rhode Island’s Temporary Caregiver Insurance Program is an insurance program financed by very small employee payroll deductions that will provide four weeks of paid leave for family care needs.  The bill has no cost for business or the state.  Rhode Island’s bill, which will go into effect on January 1, 2014, also provides job protection to workers who take advantage of the program.

Because A Better Balance helped with the drafting of the bill, I was lucky enough to be at the bill signing.  It was inspiring to hear from the heroes who got this done for the people of the State of Rhode Island and to meet the Rhode Island families who told their stories to demonstrate how critical a program like this is for all families.  State Senator Gayle Goldin worked tirelessly to bring this bill to the Governor’s desk.  For her, it was a matter of basic fairness, and her hard work, intelligence and ability to advocate for Rhode Island families resulted in making paid family leave a reality.  As she stated, “The passage of Temporary Caregiver Insurance is a great victory for Rhode Island’s families and our economy.  This law keeps money in people’s pockets when they need it most and means no one will lose his or her job when dealing with a serious family crisis or welcoming a new child into their home.” Representative Elaine Coderre sponsored the bill in the State House and spoke, as Senator Goldin did, about the personal experiences that led her to fight for this program.

It was also inspiring to hear from workers themselves who have struggled without temporary caregiver insurance and know firsthand what a difference it will make for families going forward.  Erik Denault talked about his daughter — who sat in a stroller nearby — born with a rare genetic syndrome that meant multiple seizures and the need for constant and particular care after birth.  He lost his job after struggling to care for his daughter and still be at work.  As he said, the existence of this bill would have made it possible to take some time to address his daughter’s needs and still be able to keep his job.

Marcia Coné, head of the Women’s Fund of Rhode Island (WFRI), emceed the program before the bill was signed.  WFRI recognized that this is an issue for all workers, but especially for women who still bear the biggest responsibility for family care.  They helped to put together a broad coalition that included workers, local business owners, economists, healthcare providers and healthcare and family advocates.

Marcia acknowledged and thanked A Better Balance for our help as well as Family Values @ Work and the National Partnership for Women and Families.  The presence of national groups demonstrated how important it is that Rhode Island has been able to institute this program.  Other states can follow suit (hopefully New York will be next), and ultimately, we need a Federal plan to provide support for working families when they most need it.  The United States is alone in the developed world in providing no income support for families with a new child.  It’s time for that to change and the Rhode Island Temporary Caregiver Insurance program is a great step in making that happen.

Senator Marco Rubio filed a new bill today that would provide parental leave benefits by cutting Social Security. ABB rejects the false choice between the time to care for ourselves and our families and a secure retirement.

July 1st, is a significant day for millions of workers who will begin enjoying the protections of recently enacted workplace leave laws around the country. For low-wage workers who currently do not have a single paid sick day, these laws will ensure they no longer have to worry that catching a cold or taking a sick child to the doctor could mean not making rent or even losing their job.