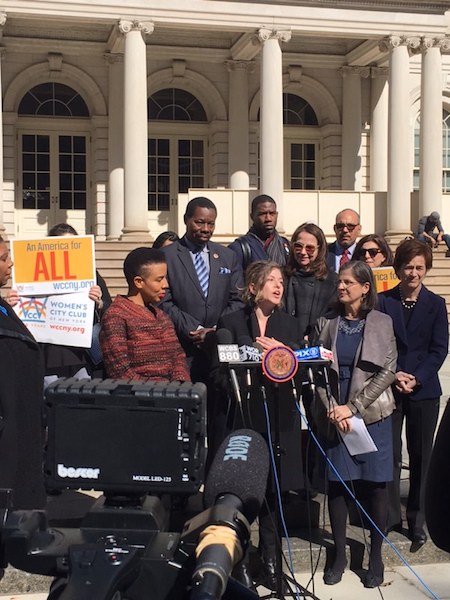 Last Wednesday, A Better Balance testified in support of a robust package of bills introduced by New York City councilmembers to help combat sexual harassment in the workplace.

From legislation requiring that both City and private employers provide comprehensive training to their employees, to lowering the threshold of the Human Rights Law to cover all employees who may face gender-based harassment, to making information about workers’ rights more accessible and understandable, to requiring that the City identify the root causes of gender-based harassment in City agencies, this group of bills will greatly strengthen New York City law.

As part of our testimony, we offered several ways the Council can further strengthen the proposed legislation, including enacting more vigorous oversight and reporting requirements for City contractors. Additionally, we highlighted outstanding issues not addressed by the legislation, such as the need for industry-specific legislation to protect vulnerable workers, specifically in low-wage and male-dominated industries.

At a press conference before the hearing, we had the opportunity to share the story of our former client Luisa, who made $10.50/hr working at a supermarket in New York City. Her supervisor repeatedly groped and touched her on the job, and continued to do so even after she got pregnant and asked him to stop, so that he wouldn’t harm her baby. Eventually, at seven months pregnant, Luisa was fired for asking to attend one pre-natal appointment. Luisa’s story reinforces why we need stronger training, enforcement, and public education around gender-based harassment.

We look forward to continuing to work with the City Council to enact the strongest possible legislation to protect New York City workers from gender-based harassment. As Council Majority Leader Laurie Combo said at the hearing, “we’re taking a hashtag and turning it into legislation.”

What every dad should know about his rights – or lack thereof – in the workplace.

Just in time for Father’s Day, here’s what every dad should know about his rights…