In 2014, I was one of only two women in the Florence, Kentucky Police Department. When I was 5 months pregnant with my second child, my doctor told me I had to go on light duty for the rest of my pregnancy. Instead of letting me serve my community and earn a paycheck, my employer pushed me onto unpaid leave.
Share on facebook
Share on twitter
Share on linkedin
Share on email
Blog Categories: Pregnant Workers Fairness 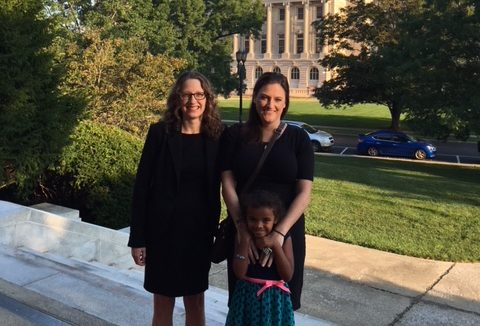 Earlier this week, as a proud Kentuckian, I was honored to join Senator Alice Forgy Kerr, lead sponsor, A Better Balance, the ACLU of Kentucky, the Catholic Conference of Kentucky, and the rest of our coalition and other legislators at a press conference to tell my story and lend my support for the Kentucky Pregnant Workers’ Rights Act. I wish this law had been in effect when I was pregnant. It would have made a tremendous difference for me and my family.

In 2014, I was one of only two women in the Florence, Kentucky Police Department. I worked 10-hour shifts patrolling the streets. When I was 5 months pregnant with my second child, my doctor told me I had to go on light duty for the rest of my pregnancy. My heavy gun belt was causing abdominal pains, my bullet proof vest was so tight I could barely breathe, and I was having heart palpitations.

When I requested a change in duty my employer, the City of Florence, said no.

Instead of letting me serve my community and earn a paycheck, they pushed me onto unpaid leave. Human Resources actually told me it was “poor planning on my part” that I would have to take unpaid leave. They even said I would lose my health insurance in the middle of a very complicated pregnancy.

I was shocked and, needless to say, worried about how I was going to support my family. During my first pregnancy, the city provided me with light duty. What had changed? I have always received good job performance reviews, and I am dedicated to my career. I love being a police officer.

While the police department was helpful and wanted to work with me, their hands were tied by a new discriminatory city-wide policy that said city workers could not have modified duty, unless we had an on-the-job injury.

To make matters worse, I also found out that our son had a rare genetic disorder that meant he would not survive long after birth. Without health insurance, I knew we wouldn’t be able to afford medical care. The city would not budge. As a result, my family and I suffered severe economic hardship. My one-year old daughter and I had to move out of the apartment we could no longer afford.

I decided I needed to fight for what was right for my family. That’s when I found A Better Balance. And I am pleased to say that with A Better Balance on my side, the city changed its tune and let me keep my health benefits. That was a relief. A Better Balance also filed a charge of discrimination on my behalf with the Equal Employment Opportunity Commission. It took two and a half years to get justice.

In December 2015, I returned to work a mere eight weeks after giving birth and after my son passed away.

As heartbreaking as this experience was it was made all the worse by having to face workplace discrimination too. If there had been a clear law on the books, then this likely never would have happened. I am fighting for the Kentucky Pregnant Workers’ Rights Act so that no other woman in my home state has to go through what I did.