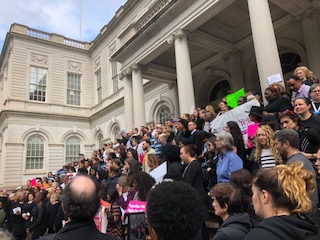 On Monday, A Better Balance was proud to join partners at the NYC Stands with Survivors rally at City Hall. Some of the most powerful moments at the rally came from survivors bravely sharing their personal stories and the crowd responding, “We see you. We hear you. We believe you.” We attended along with around 40 partner organizations to show our support for Dr. Christine Blasey Ford and Deborah Ramirez, who have accused U. S. Supreme Court nominee Brett Kavanaugh of sexual assault, and for all survivors of sexual assault.

ABB has previously highlighted Judge Kavanaugh’s troubling judicial record and the negative impact that his presence on the Supreme Court could have on women, low-wage workers, and other vulnerable groups. These recent allegations of sexual assault raise new and urgent concerns about his nomination. The goal of Monday’s event was to center the voices of survivors in the national conversation over how to respond to these allegations and to the problem of sexual harassment and assault more broadly.

In the days since this rally, allegations against Judge Kavanaugh by a third woman, Julie Swetnick, and Dr. Blasey Ford’s courageous testimony before the Senate Judiciary Committee have further underscored the urgency of this work. As Michelle Greer of Girls for Gender Equality told the crowd present at City Hall, “It is time to mirror the courage of these individual survivors with institutional courage to actually create change.”

The COVID-19 public health crisis underscores the need to ensure that women—who are the sole or co-breadwinner in most American households—are not facing additional hurdles to economic security. The wage gap contributes to higher rates of poverty for women and families, especially women of color and their families. At a time when many parents—especially single mothers—face precarious employment and the need to care for  children and loved ones, it is crucial that we ensure women and families have access to needed resources and support.

According to SisterSong Women of Color Reproductive Justice Collective, reproductive justice is "the human right to maintain personal bodily autonomy, have children, not have children, and parent the children we have in safe and sustainable communities.” In our mission to ensure pregnant workers, caregivers, and all workers have the support they need to care for themselves and their loved ones, we strongly support and are inspired by the principles of the reproductive justice movement.