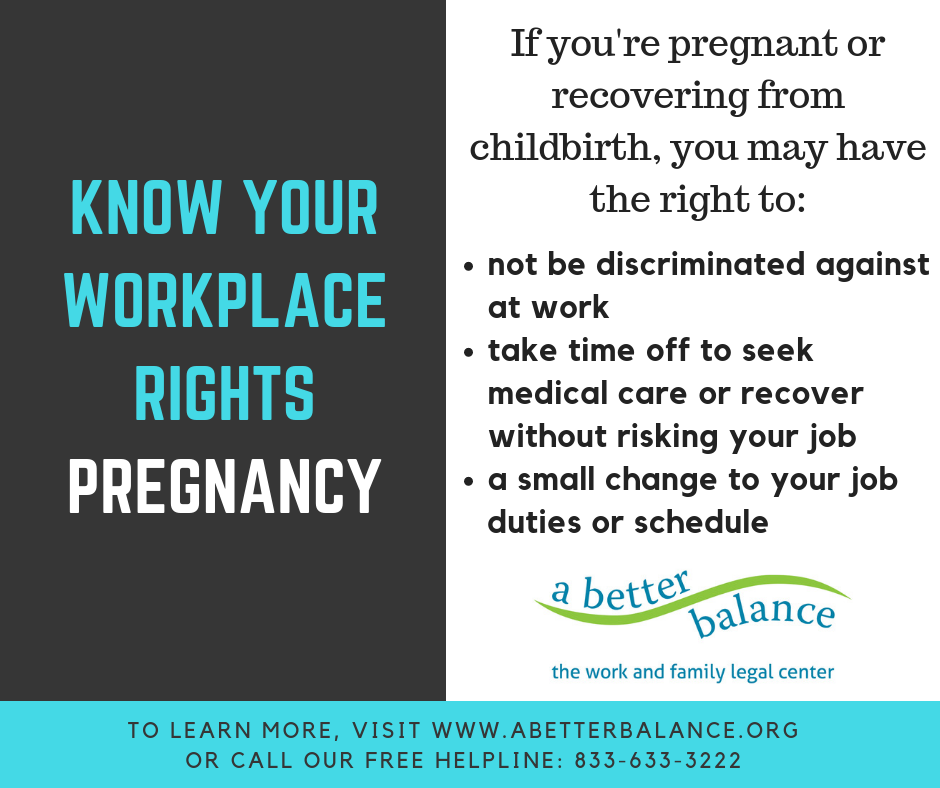 NEW YORK — The following statement can be attributed to Dina Bakst, Co-President and Co-Founder of A Better Balance.

“We see it close up.  Pregnant women, especially women in low wage and physically demanding jobs, are regularly denied the temporary and modest accommodations they need to stay healthy and working. The consequences can be devastating. Our clients have been pushed onto unpaid leave or forced off the job just when they need a paycheck the most. Some have experienced serious medical complications, including miscarriage, after their employer refused them light duty or work away from toxic chemicals.

“The Pregnancy Discrimination Act does not go far enough. That’s why we have been working tirelessly to pass the Pregnant Workers Fairness Act in Congress and similar laws throughout the country.  Today, 23 states and 5 cities have passed—often with bipartisan support—strong protections for pregnant workers. These laws are crystal clear: when a pregnant worker needs an accommodation, employers must work with them, instead of pushing them out.

“It is time for Congress to finish the job they started four decades ago and pass the Pregnant Workers Fairness Act.”

The legal team at A Better Balance has been on the front lines of fighting pregnancy discrimination across the country. In addition to its legislative work, it has filed numerous lawsuits on behalf of pregnant women whose employers have refused to provide modest accommodations to them so that they could stay healthy and on the job. A 2012 New York Times op-ed, “Pregnant and Pushed Out of a Job,” by Dina Bakst, sparked the introduction of the federal Pregnant Workers Fairness Act. Just this week, it convened, along with the New York City Bar, a panel of leading policymakers and legal scholars to reflect on the past 40 years and to chart the course ahead, “The Pregnancy Discrimination Act at 40 and the Continued Role of Lawyers.”