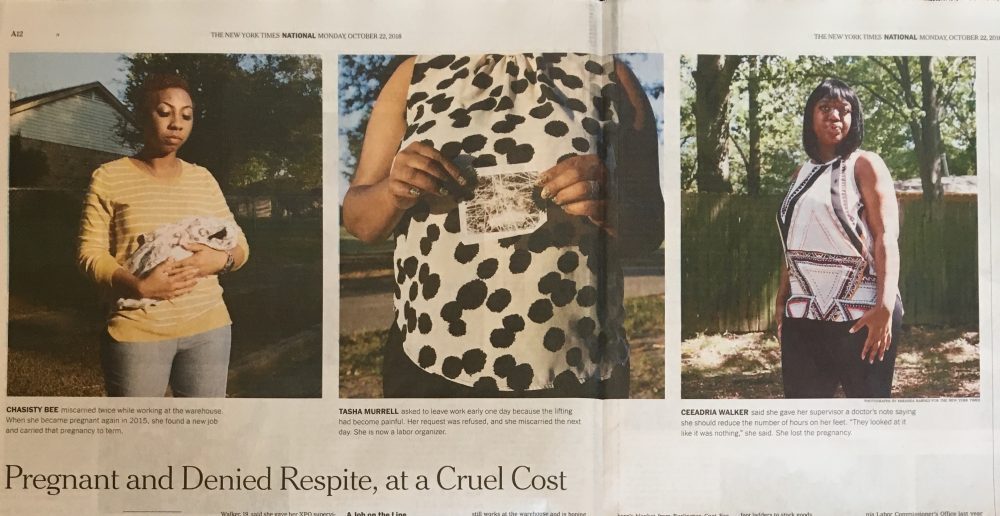 NEW YORK — Today’s New York Times front page story, Miscarrying at Work: The Physical Toll of Pregnancy Discrimination brings to light the egregious workplace conditions and treatment of pregnant workers at an XPO Logistics’ warehouse in Memphis, TN.  A Better Balance’s client, Tasha Murrell, featured in today’s story, discusses her experience of being forced to continue to lift heavy boxes even while she complained of extreme stomach pain and showed her supervisor a doctor’s note stating she should avoid heavy lifting.

The legal team at A Better Balance has been on the front lines of fighting pregnancy discrimination across the country. A 2012, Op-Ed in the New York Times, by Dina Bakst, ABB’s Co-Founder and Co-President, sparked the push for the federal Pregnant Workers Fairness Act, and we are leading the fight in states to pass similar measures, including in the South.

The following quote can be attributed to Dina Bakst, Co-Founder & Co-President of A Better Balance:

“Today’s New York Times piece on miscarriage and pregnancy discrimination in the workplace shines a spotlight on how too many employers of low-income workers put pregnant women at risk by refusing to accommodate their pregnancies. It’s unacceptable that, under the law, many pregnant workers in 2018 aren’t able to get the immediate relief they need to stay healthy and on the job. Every pregnant worker in America deserves a clear right to accommodation. Tasha’s and her coworkers’ experiences demonstrate the urgency of passing the Pregnant Workers Fairness Act in Congress and in every state, including Tasha’s home state of Tennessee.  No pregnant worker should have to choose between her paycheck and a healthy pregnancy.”

Just in time for Mothers Day, the Commission on Human Rights released guidance to clarify…

Our Callers: Highlight from the Paid Family Leave Hotline

“I reached out to A Better Balance when I was confused about what parental leave I might be entitled to—my union had just agreed to opt-in to paid family leave, but no one seemed to have much information about how the program was going to work."