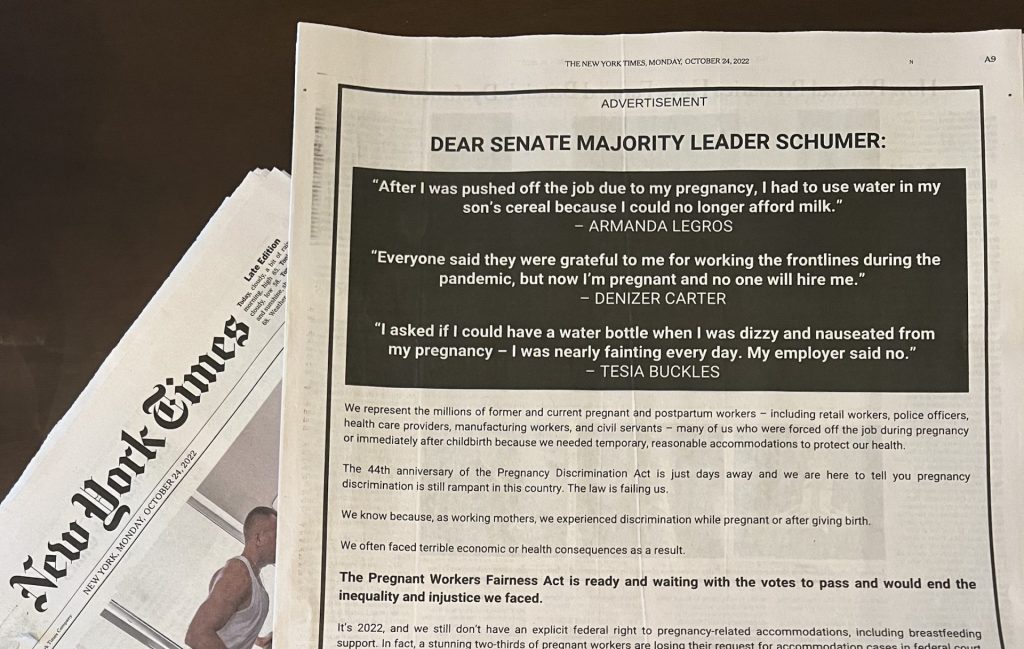 “Don’t fail pregnant women and families like us on your watch,” the moms say in their letter to Senator Schumer, urging him to hold a vote on the women’s rights bill—which has enough votes to overcome a filibuster— when Senators return to Washington.

Noting that the 44th anniversary of the Pregnancy Discrimination Act is just days away, the letter highlights that the law is still failing women. Gaps in the law have left countless women vulnerable to discrimination while pregnant or after giving birth. Many of the women who signed the letter were frontline workers who were pushed off the job and experienced devastating economic consequences because they couldn’t get modest accommodations at work:

“After I was pushed off the job due to my pregnancy, I had to use water in my son’s cereal because I could no longer afford milk.” – Armanda Legros

“Everyone said they were grateful to me for working the frontlines during the pandemic, but now I’m pregnant and no one will hire me.” – Denizer Carter

“I asked if I could have a water bottle when I was dizzy and nauseated from my pregnancy – I was nearly fainting every day. My employer said no.” – Tesia Buckles

The economy is of top concern for voters heading into midterms, and it is clear that women are very worried about their financial well-being. Many women—especially women of color in low-wage, service industry jobs—have no right to get modest accommodations to work safely while pregnant or after giving birth. The Pregnant Workers Fairness Act would help them stay healthy and attached to the workforce so they can support their families.

“We are so grateful to the brave moms who signed this letter after experiencing discrimination. Leader Schumer cannot ignore their voices. He must heed their call,” said Dina Bakst, Co-Founder & Co-President of A Better Balance. “They are speaking out so that what happened to them does not happen to other moms like them. The Pregnant Workers Fairness Act is common-sense legislation that will save lives in the midst of a worsening maternal mortality crisis, while at the same time providing economic security to millions of American families. It has the votes to pass but Leader Schumer must not squander this opportunity. He must bring the Pregnant Workers Fairness Act to a vote right when he returns to Washington DC in November. ”

While we’ve seen so many priorities from paid leave to childcare fail this Congress, the Pregnant Workers Fairness Act has enough bipartisan votes to pass and would put an end to this mistreatment mothers face across the country once and for all. The Senate must seize the opportunity to support pregnant women and families before it is too late.