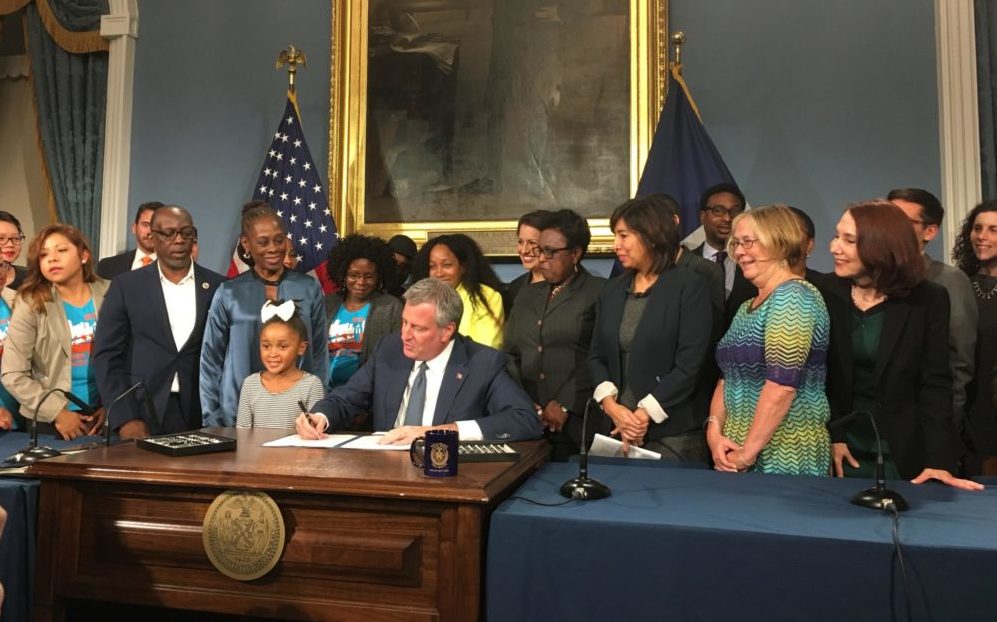 A Better Balance was proud to be on hand at City Hall yesterday as Mayor de Blasio signed into law an expansion of New York City’s paid sick time law to cover domestic violence purposes and to expand the definition of family members for whom New York workers can take sick leave. ABB helped draft and pass the original Earned Sick Time Act that was enacted in 2013 but in the struggle to give 3.4 million New Yorkers the right to paid sick time, the right to use that time for legal and housing needs caused by domestic violence, sexual assault and stalking was lost. We are delighted that these important uses of sick time are now part of the law in addition to the further expansion to cover needs related to human trafficking. In recognition of ABB’s leadership on earned paid sick time, the Mayor’s office asked Sherry Leiwant, Co-President of A Better Balance, to speak at the signing and she applauded the Mayor, City Council, and the Department of Consumer Affairs for making this expansion happen.

New York City joins states and cities around the country in covering safe time in their earned sick time laws. The expansion of the definition of family members for whom a worker can take paid sick time is an honest reflection of what American families look like in the 21st Century. In fact, fewer than 20 percent of American households consist solely of a “nuclear” family of a married couple and their biological children, with more multigenerational households than ever and non-legal relatives serving as caretakers. In fact, according to new data from the Center for American Progress (CAP), nearly a third of people in the U.S. report taking time off to care for the health-related needs of a chosen family member, with an even greater percentage of LGBT individuals and people living with disabilities doing so. Both of these expansions will greatly help New Yorkers. “The law’s new family definition and ‘safe time’ expansion will work powerfully together, since workers who are trying to flee violence and stay safe often need to turn to their chosen family for support and care.” said Jared Make, ABB’s Senior Staff Attorney and Director of LGBTQ Rights, in a statement released following yesterday’s signing ceremony.

To learn more about our work to ensure that workers in New York and around the country can care for their chosen family—or close loved ones who may not be biologically or legally related—check out our full press statement released yesterday (co-authored with two partners in our family definitions work, Family Values @ Work and CAP).

In conjunction with this victory in New York City, we have also co-released a new infographic, 5 Facts About Chosen Family, to raise awareness about family diversity and underscore the momentum for defining family broadly in paid leave laws and protections.

On September 29 and 30, those charged with enforcing paid sick time laws around the…

If successful, Austin would join a nationwide momentum of cities and states passing paid sick time laws to protect workers, while becoming the first jurisdiction in the region to do so.