Fighting for Paid Leave For All, From Coast to Coast 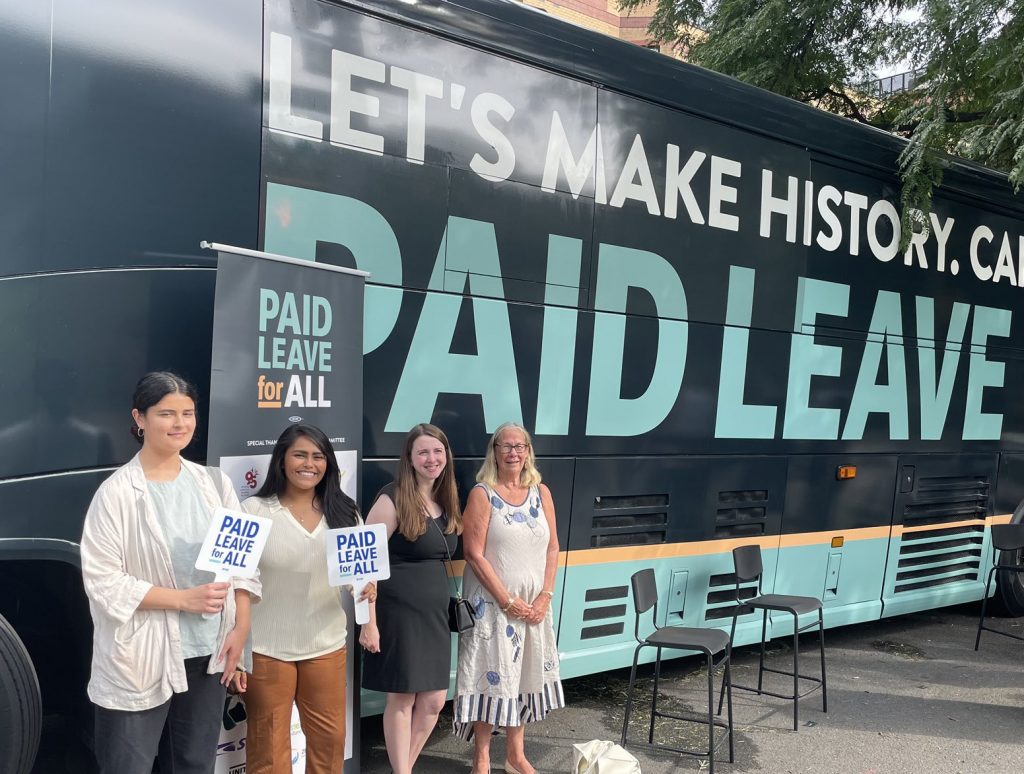 Throughout the month of August, Paid Leave For All has been on a cross-country bus tour raising awareness about the urgent need for a federal paid family and medical leave program. We were thrilled to be on the ground for the New York City, D.C., and Colorado legs of the tour, where we celebrated paid leave victories across the country and highlighted the need for comprehensive paid leave for all Americans.

As a leader and co-founder of the national Paid Leave For All campaign, A Better Balance has played an instrumental role in passing paid leave policies in numerous states. In New York, we’ve seen how groundbreaking the state’s 2016 paid family leave law has been and heard directly from workers who understand firsthand how vital such policies are. At the tour’s Manhattan stop, ABB Co-Founder and Co-President Sherry Leiwant spoke alongside the city’s First Lady Chirlane McCray, head of Time’s Up Tina Tchen, actress Amber Tamblyn, and Rubi Jones, a small business owner who is fighting for paid leave for beauty industry workers.

We highlighted the success of the state’s paid leave law, which has helped millions of New Yorkers take the time they need to welcome a new child or care for their seriously ill loved ones, and lifted up the stories of Samantha and Amir, two New Yorkers who have used paid leave provided by the law to care for their children’s health needs.

“Passing a federal paid family leave act will result in financial stability, peace of mind, healthier families, a stronger economy, and ultimately the freedom for parents and caregivers to better protect their family, which feels like the most American thing we can do,” Amir told us.

“Parents and families across the country deserve the same protections that I have here in New York,” Samantha echoed.

“America does not recover until American families recover,” said Senator Gillibrand, compounding the importance of prioritizing policies that support working families as we begin to recover from the pandemic.

In Colorado, we attended both the Denver and Colorado Springs stops, where we joined a number of key partners, including  9to5 Colorado, Good Business Colorado, Small Business Majority CO, and Mi Familia Vota CO, to celebrate passage of the state’s first-in-the-nation paid family and medical leave ballot initiative. We also heard from Colorado State Representatives Matt Gray and Yadira Caraveo, as well as State Senators Brittany Pettersen and Faith Winter, who highlighted the bipartisan support paid leave programs have seen across the country, saying, “We need to be working on issues that unite us and don’t divide us.”

Our Colorado office is proud to have worked with state legislators and our wonderful partners on the ground to make the state a leader on the paid leave front, and as Paid Leave For All’s bus tour continues across the Western half of the country, we hope that victories at the state level in states like New York and Colorado can serve as models for a comprehensive federal paid leave program that covers workers nationwide.