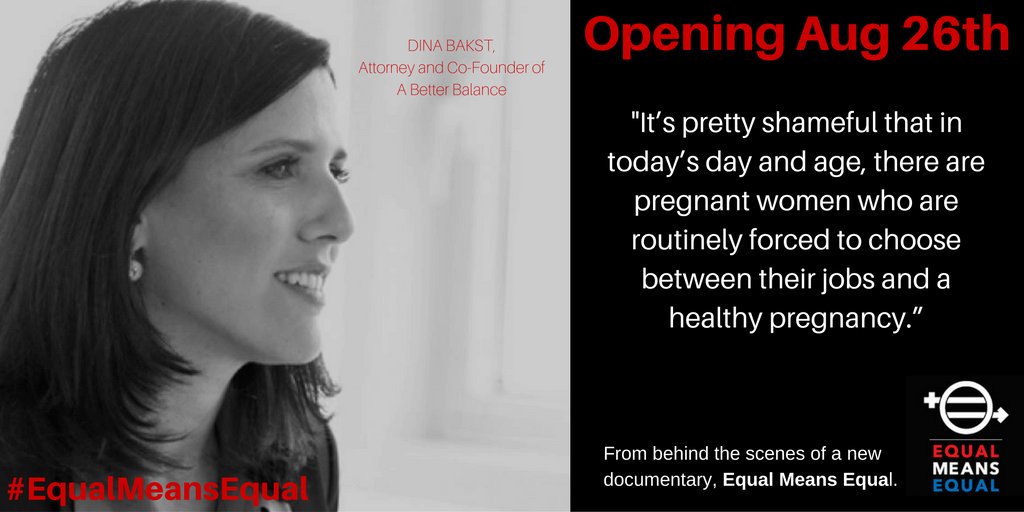 On Friday, September 2, Equal Means Equal, a documentary that features Dina Bakst, A Better Balance Co-Founder and Co-President, and Armanda Legros, A Better Balance client and community activist, is opening in New York. The film tackles the barriers to equality that women face in the United States.

Equal Means Equal looks at the legal landscape in the United States, and how laws, court cases, and even the constitution discriminate against women to hold them back from advancement. The film covers a wide range of topics from workplace matters to domestic violence, rape and sexual assault, the foster care system, the healthcare system, and the legal system.

The film demonstrates the inadequacy of present laws in place that claim to protect women, ultimately presenting a compelling and persuasive argument for the urgency of ratifying the Equal Rights Amendment.

The film includes an interview with Dina Bakst, who speaks about how many pregnant workers are pushed out of the workplace when they need accommodations in order to stay healthy and employed in the United States.  Armanda Legros’s struggles with being pushed out of work when she was pregnant are also highlighted.  In addition, A Better Balance submitted educational materials addressing pregnancy discrimination and leave laws to accompany viewings of the film.

Other experts interviewed in the film include Patricia Arquette (Executive Producer), Gloria Steinem, and other international policymakers, prominent public intellectuals, and American activists.

The film opens in New York at the Village East Cinema on Second Avenue and 11th street.  The 7:05pm screening will be followed by a Q&A with director Kamala Lopez and special guests.

As highlighted in Equal Means Equal, the problem of discrimination against pregnant workers and workers who need leave to care for themselves and their family members is a present barrier to equality in the United States.  If you believe that you are facing unfair treatment relating to pregnancy, caregiving, and/or leave in the workplace, call our free legal hotline at 212-430-5982 for advice.