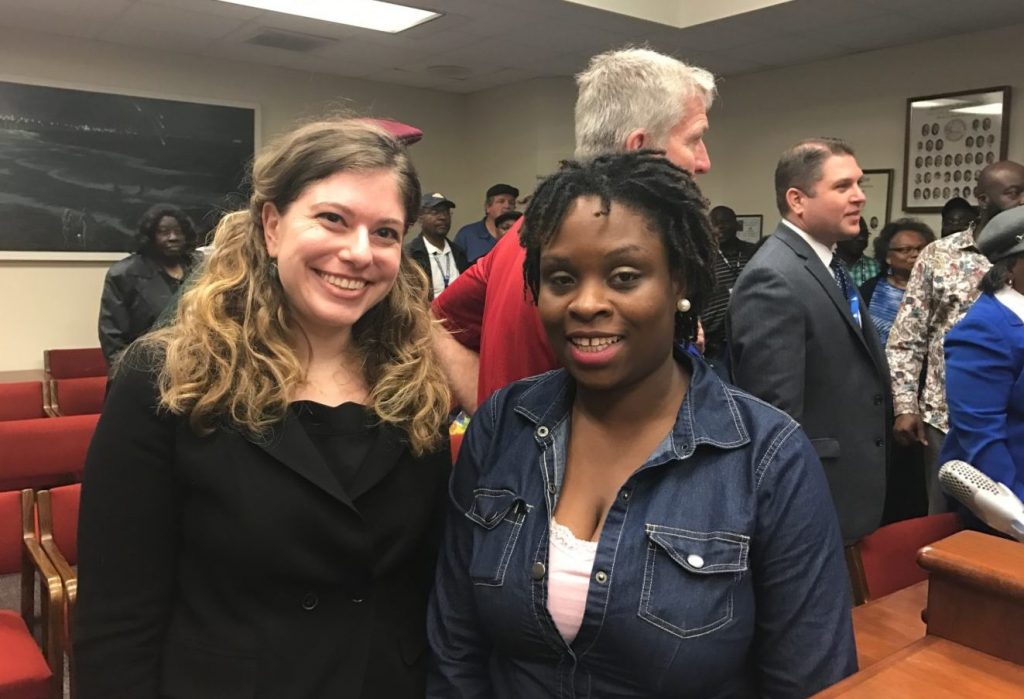 Yesterday, A Better Balance community advocate Natasha Jackson and ABB Skadden Fellow Sarah Brafman testified in Columbia, S.C. in support of the South Carolina Pregnancy Accommodations Act. The bill, introduced with bi-partisan support, would ensure that pregnant workers receive reasonable accommodations they may need to stay healthy and on-the-job. After delivering the testimony, the House Judiciary subcommittee voted 5-0 in favor of the bill. It will now move on to a full committee vote.

Too often, pregnant workers are pushed off the job or forced onto unpaid leave when all they may need is a fairly simple accommodation—such as a stool or more frequent water breaks—that could help them stay on the job. This is exactly what happened to Natasha Jackson.

Natasha testified that she was working as an account executive at a Rent-A-Center in South Carolina when she became pregnant with her third child. For two weeks, her supervisor worked with her to accommodate her morning sickness. When the district manager and HR learned about her pregnancy, however, they forced her to go on unpaid leave and they ultimately fired her, even though a small accommodation would have kept her on the job. The company accommodated other employees with on-the-job injuries but refused to accommodate her. Natasha filed a pregnancy discrimination claim against Rent-A-Center, but ultimately lost in arbitration after a two-year process. Natasha suffered both economically and personally as a result of Rent-A-Center’s treatment. Her story was first featured in a report co-authored by ABB and the National Women’s Law Center.

Natasha’s sister also faced discrimination on the job when the shoe store she worked for in Charleston refused to let her carry a water bottle on the floor to stay hydrated. Ultimately, one day, when her employer refused to provide her a lunch break, she had to be rushed to the emergency room and discovered she had a serious pregnancy-related condition.

“I am asking you to stand up for women like me,” Natasha said to the subcommittee, “so we can have an equal opportunity to support our families while protecting our health. The South Carolina Pregnancy Accommodations Act would ensure that no pregnant woman in South Carolina has to choose between her job and a healthy pregnancy.”

In her testimony, ABB Skadden Fellow Sarah Brafman emphasized the clarity this law would bring for employers, who are often confused about their obligations under federal law and can end up in costly litigation. She also emphasized that the law will likely have little to no fiscal impact, citing the Tennessee Human Rights Commission’s assessment of a similar pregnant worker’s fairness bill introduced in that state. She also conveyed that this law is not only about ensuring women can stay healthy, but is also about supporting families, since about 40% of women nationwide are the primary or sole breadwinners. Their families simply can’t afford for them be pushed off the job while pregnant.

ABB is also very grateful to our South Carolina partners, the Women’s Rights and Empowerment Network for their tireless advocacy in support of this legislation. We urge the South Carolina legislature to swiftly pass the Pregnancy Accommodation Act to ensure a fair workplace for all pregnant workers in South Carolina.