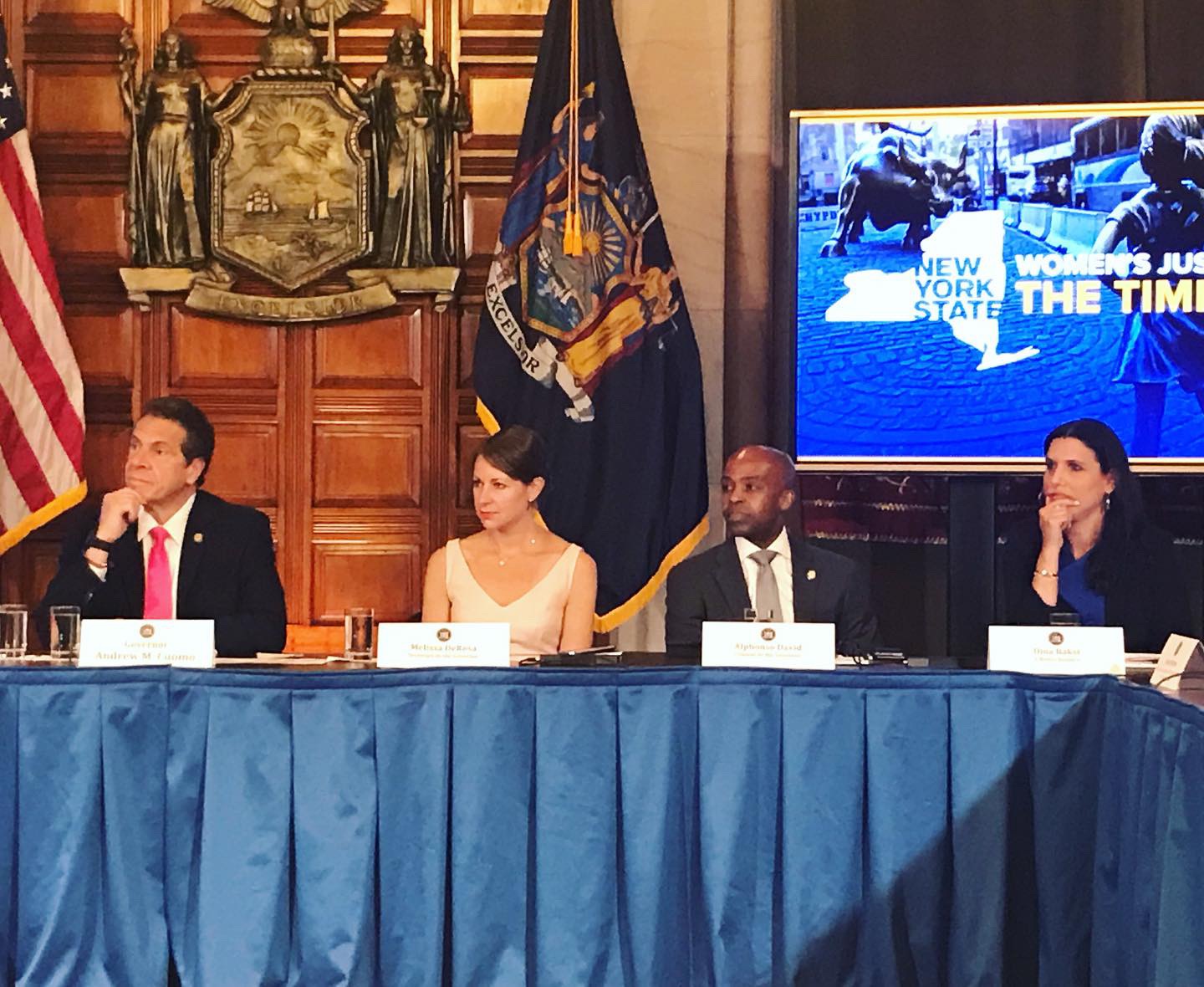 On Monday, we joined Governor Cuomo at a press conference in Albany as he pushed for passage of key measures of his Women’s Justice Agenda by the end of legislative session on June 19. Our Co-Founder and Co-President Dina Bakst, who joined the Governor at the dais, spoke about the need to modernize New York’s pay equity laws by passing the salary history ban and extending wage discrimination protections to all protected classes.

Bakst stressed the need to pass a bill banning inquiries into salary history, “a practice that discriminates against women and people of color who historically earn less at the outset of their careers and whose low wages follow them job to job.” She also pressed legislators to “advance legislation to expand the definition of equal pay for equal work to require employers to require equal pay on the basis of race, ethnicity, gender” and other protected classes. Both these measures are central to A Better Balance’s equal pay agenda.

Other women’s advocates and activists including Robbie Kaplan, Co-Founder of Time’s Up Legal Defense Fund, and Sonia Ossorio, President of the National Organization of Women NYC, also highlighted the need to update the State’s sexual harassment laws, including the need to abolish the severe or pervasive standard.

Governor Cuomo made it clear he wants New York to lead the nation on women’s rights and women’s equality issues: “New York should set the national standard for women’s rights. We should be in a position where every other state, every other advocacy group anywhere else in the country says, ‘Why can’t we do what New York does?’” he said.

Join us in making sure New York keeps leading by urging your legislators to pass these equal pay measures by the end of session!

We were honored to be invited by the Tennessee Senate Health & Welfare Committee to present data on the health benefits of providing pregnant workers with reasonable accommodations, when needed. We were joined by our partners at the March of Dimes, who highlighted Tennessee’s high preterm birth rate and persistent racial disparities. Together, we made the public health case for the Tennessee Pregnant Workers Fairness Act.

Medicaid recipients who can and do work are at risk of losing health care coverage, since low-wage workers are more likely to be underemployed and to face unpredictable work schedules over which they often have no control. This is just one of the challenges that many of ABB’s clients and others already face in balancing work and their responsibilities in caring for children and other family members.

In a packed gymnasium at the West Side YMCA, Governor Andrew Cuomo and House Minority…