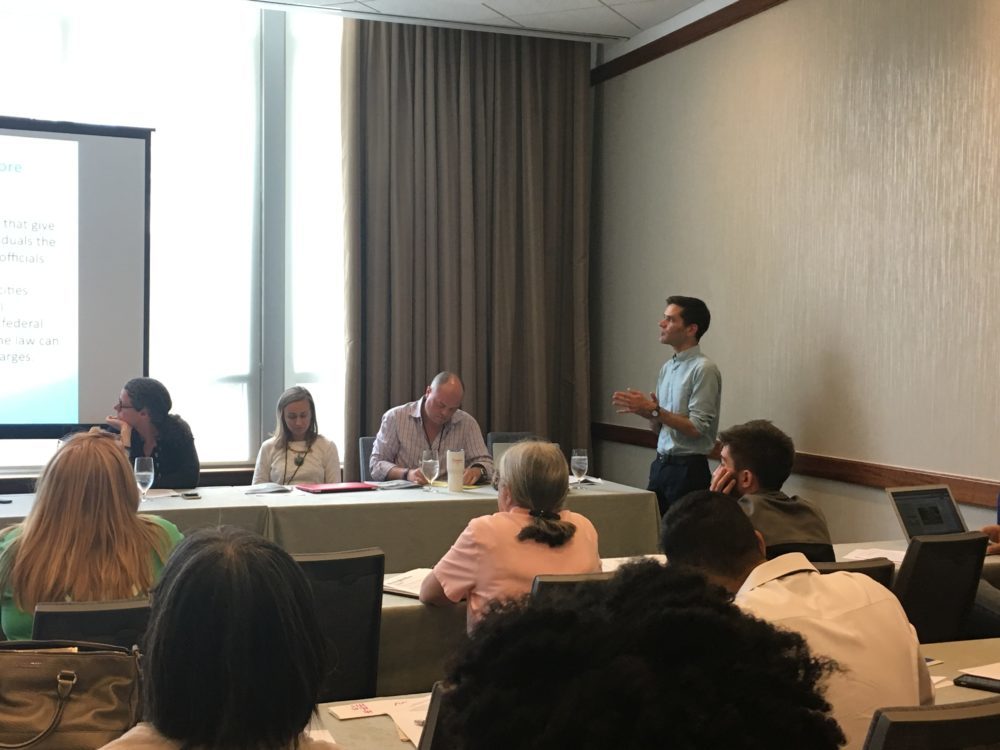 Last week, A Better Balance attended the Equality Federation Leadership Conference in Alexandria, Virginia—an annual gathering of LGBTQ movement leaders from across the country. The four-day event featured keynote speakers, workshops led by advocates fighting for LGBTQ rights at the state and national level, including ABB’s Jared Make, and the conference’s famous “FEDtalks”—five-minute talks by the leaders of state-based LGBTQ equality groups.

ABB, in partnership with Equality Florida, Freedom Oklahoma, and the ACLU’s LGBT & HIV Project, presented the workshop “Fighting to Stop Rollbacks of LGBTQ Rights at the Local Level: New Lessons and Tools.” This workshop discussed the growing threat of state “preemption” laws that block cities and counties from passing local legislation on a broad range of issues, including civil rights and social justice matters. Significantly, the presenters also highlighted successful efforts to fight back against such state interference in Oklahoma and Florida, and shared tools to help strengthen state and local LGBTQ rights efforts.

Recent victories and progress by the LGBTQ movement—even in some of the least expected places—were running themes throughout the conference that proved uplifting for the more than 200 advocates in attendance during a particularly fraught time. Indeed, news of the Trump administration’s intent to roll back LGBTQ rights broke just as the conference began. On the first morning of the gathering, Donald Trump announced via a series of tweets that the United States will not “accept or allow” transgender people to serve in the U.S. military, citing concerns—that do not hold up by the facts—related to health care for transgender service members. The Williams Institute estimates that there are 15,500 transgender adults currently serving on active duty in the military or in the National Guard or Reserve forces who could be impacted by such a policy.

The same day, July 26, the Department of Justice filed a brief in the Second Circuit Court of Appeals in the case of Zarda v. Altitude Express, Inc. arguing that federal anti-discrimination law permits discrimination against lesbian, gay, and bisexual employees. Specifically, the brief argues that sex discrimination—illegal in employment under Title VII of the Civil Rights Act of 1964—does not include sexual orientation discrimination. This argument stands in stark contrast to the position of the Equal Employment Opportunity Commission, the federal agency responsible for enforcing Title VII, and to a recent decision issued by the Seventh Circuit Court of Appeals, in which Chief Judge Diane Wood aptly observed the “common-sense reality” that it is “actually impossible to discriminate on the basis of sexual orientation without discriminating on the basis of sex.” ABB previously signed on to a separate brief in the Zarda case, authored by our partners at the ACLU and NYCLU, expressing the same view in recognition of LGB employment rights.

Both of these brazen attacks on LGBTQ rights by the Trump administration strike at the heart of ABB’s mission to promote workplace fairness for all workers and to ensure that they are able to care for themselves and their families during critical times—regardless of sexual orientation and gender identity, and no matter what form their family takes. ABB stands in strong opposition to any attempt to undermine the dignity of LGBTQ people and will continue to fight, through our joint LGBTQ Work-Family project with Family Values @ Work, for an end to discrimination against LGBTQ workers and families. As last week’s inspiring gathering of hundreds of LGBTQ advocates and leaders from nearly every state in the nation proved, this is a fight we can and will win.

Although families are incredibly diverse, our laws and policies often define family relationships narrowly. In 2018 A Better Balance worked with partners across the country to ensure that all family members, regardless of biological or legal ties, would be covered by these important workplace protections.

Congress's “Workflex in the 21st Century” bill will undermine robust state and local paid sick leave and fair scheduling laws as well as efforts nationwide to ensure that workers can take time off to care for their loved ones.

Fed Watch: The Supreme Court’s Huge Case on Voting Maps: What It Means for Progressive Advocates